Golf is, without a doubt, one of the most exciting sports in the world. It is famous for both recreational purposes and competition. However, Golf is also one of the most confusing games to people playing it for the first time.

Some of the things beginners grapple with are golf terms and rules. One such term is 4-ball golf. What does it mean to utilize 4-ball stroke play or 4-ball match-play formats? Is the 4-ball play competition popular? Read on to find out.

4-ball stroke play is rule 32, and it involves two players playing as partners with each using their golf ball. The partner with the lower score makes the score of the hole. If one partner in both forms of play fails to complete a hole, they do not accumulate any penalties. Instead, the other partner tries to make a score and keep the game going.

The name 4-ball appeared for the first time in the R& A rule book of 1908 because the match had four games playing on the pitch. It was just a 4-ball match play initially, but 4-ball stroke play appeared in the rules in 1952.

Read also: What Is An Eagle In Golf

Penalties in both 4-ball match play and 4-ball stroke play come in two categories. The first category involves penalizing the entire side for any breach made by any of the partners on the side.

Disqualification penalties fall under the second category, and they come in two subsets. The first subset is when one of the partners makes a breach, while the second one is when both partners breach. In both cases, if disqualification results from a breach of the rules but does not have any specifications, the disqualification for the competitor only takes effect for the hole leading to the breach.

In the third category, the penalty only applies if one of the players breaches the rule to assist the other partner in a move that affects the competing team or player.

The 4-ball golf play is not an easy thing to understand for new golfers, but with more time at the golf course and further understanding of the rules, it gets easier.

The most crucial factor to note is that whether you are participating in 4-ball match play or 4-ball stroke play, you should note the differences between the two and follow the rules as stipulated to avoid accumulating penalties. I hope this answers the question- What Is 4-Ball in Golf.

Related posts:
How Long Does It Take To Golf 9 Holes
Golf Club Distances
How To Clean Golf Clubs
Which Golf Club Is Designed To Hit The Ball With The Highest Launch Angle
Contents show
What is 4-ball?
4-ball match play and 4-ball stroke play key points
4-ball penalty administering
Wrapping It Up 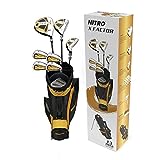